RABBI SAMANTHA NATOV GREW UP in Dundas, Ontario. She holds a bachelor’s from McGill University and a master’s in musicology and ethnomusicology from the University of Virginia. Following her time as a cantorial soloist in Toronto, Rabbi Natov came to New York to earn her degree in sacred music from Hebrew Union College-Jewish Institute of Religion. After working as a cantor at congregations in New Jersey and Brooklyn, she decided to become a rabbi. Rabbi Natov was ordained by HUC-JIR in 2015 and joined Stephen Wise Free Synagogue a few months later in July 2015.

Rabbi Natov is piloting a number of new programs, including one called “One-to-One Conversations.” Participants will sit across from each other and, almost like speed dating, they’ll spend five minutes getting to know one another and building new connections before half of them get up and move to another table. We had our own “One-to-One” conversation with Rabbi Natov. Here’s how it played out:

What’s your vision for adult education program- ming in the coming year?

People connect with Judaism in different ways. Some of us are more interested in Torah study than in ritual observances. Others of us feel most deeply connected when gathering in community and praying or celebrating a holiday. And some experience their spiritual selves most fully when pursuing social justice work.

I want to welcome people with a little bit of something for everyone — like learners’ services, Torah study through art, a Jewish wisdom initiative geared towards different life stages, or classes on mussar, a traditional Jewish practice of mindfulness and self-improvement.

What is your underlying mission for these programs?

There are three components. First, I want to invite people to explore how vital Jewish rituals and teachings can be, and to experiment with per- sonalized practices that support their ideals and identities. Second, in modern times — and especially here in Manhattan — we can often feel isolated from one another. Though we’re always surrounded by people, close relationships are harder to come by. A main goal of mine is to provide a warm and welcoming space in which our congregants can forge bonds with each other and develop lasting friendships. Third, Jewish tradition is rich with narratives that provide meaningful life lessons. The programs will be highly interactive and will weave in ethical and moral teachings that people can draw upon in their everyday experiences.

What do you see as the foundation of our social justice work?

Jewish teachings, stories, rituals, and community building are the foundation for our actions. Judaism highlights the story of how we were freed from slavery in Egypt. This is a fundamental narrative of our people. One might imagine that we would want to distance ourselves from our history as victims of aggression and persecution. Why don’t we shrug off this past? The answer is simple: in order to feel compassion for those in need. The Torah tells us no fewer than 36 times to remember the stranger, orphan, and the widow as we, too, were once strangers — so that we will take action. It’s not enough to have empathy; Judaism is a religion of action.

Well, it’s no secret that you love stories. What is a favorite teaching from a Jewish folktale?

There are so many! Here’s one I especially like. It’s a Hassidic tale: When Zusya was getting old, he used to say to his disciples, “After I die and I go to the heavenly courts to be judged, they will not say to me there, ‘Zusya, why weren’t you Moses?!’ Instead, they will say to me, ‘Zusya, it was fully in your power to have been Zusya. No one in heaven or on earth could have stopped you — so why weren’t you Zusya?’” This story reminds us to ask ourselves, “Are you being your most authentic self?”

I feel blessed that I get to live out my authentic self as a clergy member, wife, mother, friend, and colleague in this community. 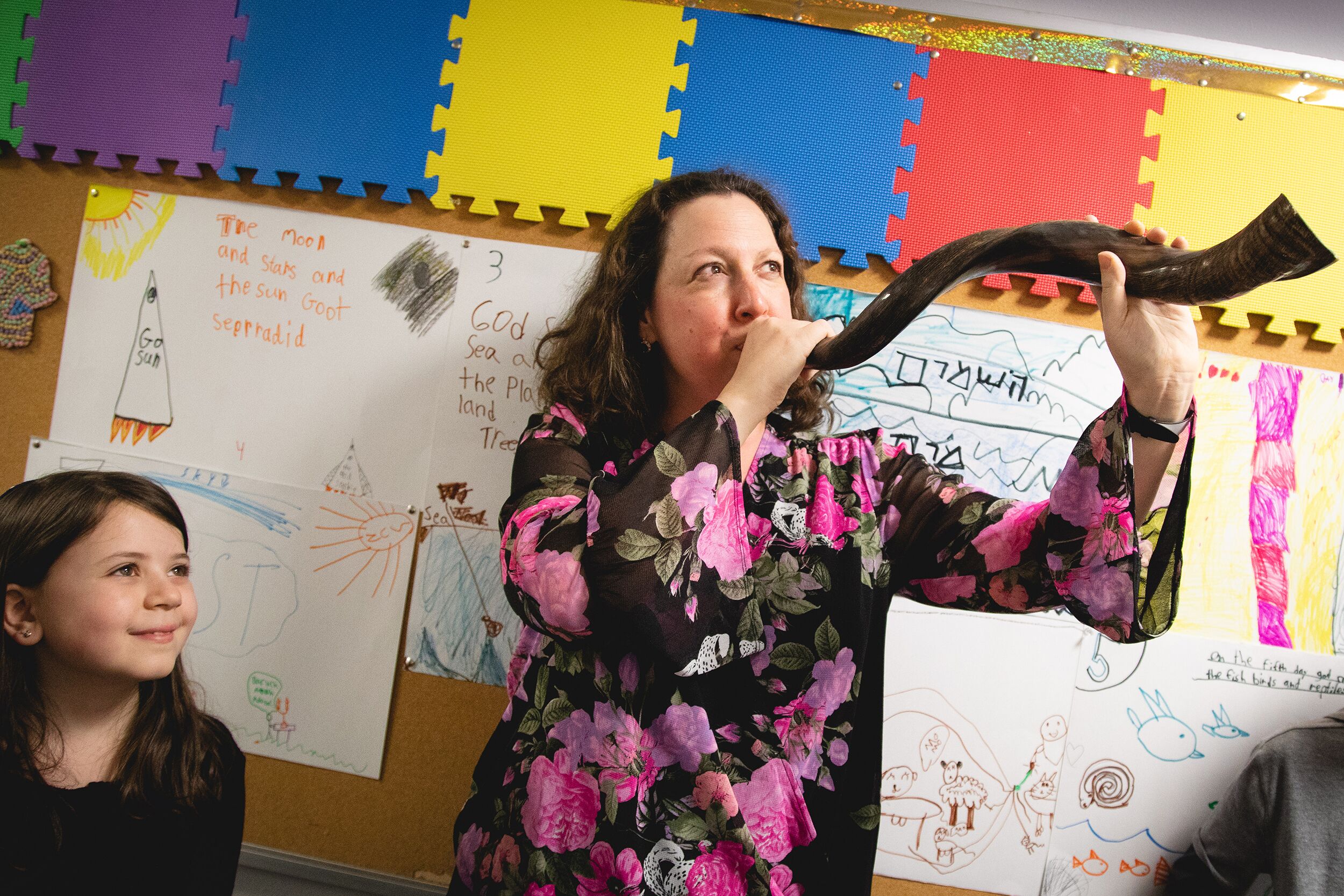 You built our Family Experiences program into the success it is today. What’s one of your favorite moments?

I love it when parents tell me how much the Shabbat programs mean to their children. One mom told me that all week her toddler says, “Sha-bowt, Sha-bowt,” in anticipation of Tot Shabbat Together. A dad told me about how his children like to pretend to be Cantor Dan and me leading a service — while he and his wife are playing the role of congregants. Through stories like these, I see how families are impacted by our shared Shabbat experiences.

Something else is coming up this year: I hear you’re planning a bat mitzvah! Mazel tov!

Yes! We’re looking forward to celebrating my daughter Lexi’s bat mitzvah with the entire congregation on November 23. Save the date! The services will be at 10 a.m., followed by a light luncheon. Everyone is warmly invited. And Max still has a few years to go, but he’s very excited, too!