Whether you joined us in-person or online these past High Holy Days, we're sure you noticed that our services were a little bit different this year — in quite a few ways!

What you might not know is how much effort went in to creating a hybrid worship experience that was familiar yet allowed our congregants to participate no matter where they were. Here’s a look behind the scenes…

To protect everyone in the sanctuary, our synagogue engaged a team of health and hygiene experts who helped us create very extensive safety protocols ahead of our reopening. As part of this effort, we improved air flow and circulation and fitted our podiums and choir member stations with plexiglass surrounds and plastic sheeting.

“We made all kinds of creative changes to make the worship experience as happy as possible, as uplifting as possible and as safe as possible,” says Rabbi Ammiel Hirsch.

“Around our virtual table we had a team advising us on industrial hygiene, security, our building's architecture and engineering, medical issues, ventilation and airflow, government relations and legal matters,” says Executive Director Sandy Divack Moss. “Without spending countless hours consulting with these people, we never would have been able to open as safely and smoothly as we did. And not a week goes by without our continuing to seek their advice.”

And we’re sure you noticed the two 10-foot screens flanking the ark and which allowed us to bring in congregants and musical talent who otherwise wouldn’t have been able to participate.

We needed people who were familiar with our service to operate the two laser projectors mounted on our balcony. So our communications director, Ryan Greiss, and communications associate, Steven Morris, who had both worked closely with Rabbi Samantha Natov and our honors committee to produce all the videos you saw, learned to use the equipment in only a few days. 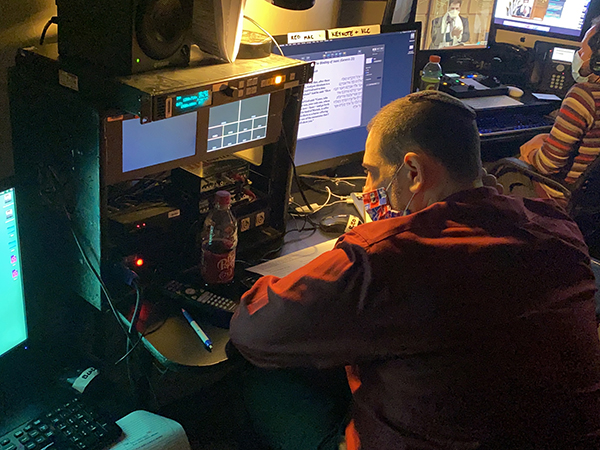 “It’s always been my job to play the Bergen Belsen recording at exactly the right moment in the Yom Kippur afternoon service — and that was always a little nerve-wracking,” says Ryan. “This time, I had to worry about playing everything at the right time!”

Controlling our three high-definition cameras — and live streaming the services to the world — was our longtime videographer and technician, Edgar De La Vega. 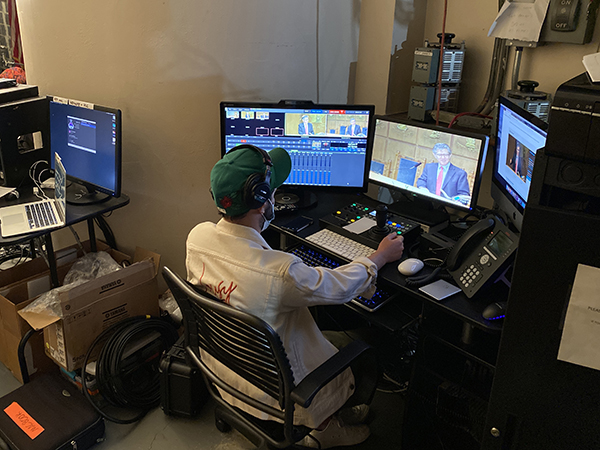 “Usually we prepare to work for a few long days on Rosh Hashanah and Yom Kippur,” says Edgar, who’s been behind the camera at Stephen Wise’s Shabbat and holiday services and b’nai mitzvah for more than four years now. “But this year we had to work around the clock every day for about a month before the High Holy Days — while also making sure Shabbat services and b’nai mitzvah went off without a hitch.”

I Want To Be A Producer

Without our members, there would have been nothing to play on our 10-foot screens! Led by Rabbi Natov and organized by our honors committee, congregants met with Rabbi Natov, Rabbi Shira Gluck, Cantor Dan Singer and our communications staff over the course of two weeks to record each of the honors.

“It was important to us that we found a way for congregants to participate in honors over the High Holy Days even though we couldn’t be together on the bimah,” says Rabbi Natov. “SThe clergy, together with our ritual committee and communications staff, worked tirelessly, reaching out to and recording our congregants in advance of services.”

“Ensuring that all of our more than 100 honorees were recorded and that their footage was then edited together to make 35 final videos — some with multiple versions — meant that we needed to keep a lot of information organized,” says Steven.

“Participation from the congregation has always been a fundamental part of our identity and our services. We wanted these High Holy Days to feel as close to ‘normal’ as possible — and to allow for those who were in our sanctuary and those who chose to stay home to have the same meaningful experience,” says Cantor Singer. “Following strict protocols regarding singing and wind instruments to keep everyone safe, we prerecorded all of the High Holy Days music with our band and a quartet of masked singers over the course of a very long day. We used that music for services and for the backing tracks accompanying our very talented congregational soloists, so that everyone could participate and it looked and sounded as if everyone was in the sanctuary, singing and playing together.”

“Being able to see our members together on screen throughout worship on Rosh Hashanah and Yom Kippur made all the difference in helping us feel connected to each other,” adds Rabbi Natov.

After production wrapped, Ryan and Steven closely reviewed the hours of footage before delivering it to Edgar — with meticulous notes — so he could edit the 35 final videos that played during this year’s High Holy Days services.

“After Ryan and Steven sent me the footage and their notes, I would organize and edit each video — which often took several hours and several emails back and forth to get exactly right,” says Edgar. “I had to mix and match footage from different recording sessions and loop some videos and cut others to make sure prayers were synchronized and that video shot separately would work together and look as natural as possible. Then I added name titles and labeled each video so we would know when in the services they should play.”

“We had an amazing turnout for tot and family services,” says Rabbi Gluck, who led the virtual services for young families with Rabbi Rena Rifkin — and is running virtual Family Experiences until we can gather in person again. “Before the holidays, we provided Tot Shabbat kits with all sorts of objects to help families learn and interact virtually. During Tot Shabbat I like to invite our kids to cuddle their plush Torah scrolls while I teach about Torah. It’s absolutely adorable.”

And since so many of our congregants had to join the main services remotely this year, Rabbi Gluck was there with our viewers on Facebook and YouTube, making sure everyone could keep up with the electronic prayer books she’d prepared and offering ways to connect with the services and with each other.

“People were so happy that they were able to feel like they were in the sanctuary from afar, and they loved seeing their friends from the congregation up on the screens,” she says. “We got so many messages of appreciation from people who were homebound — and not just because of COVID — thanking us for giving them the opportunity to worship during the holy days, and for having a rabbi with them online to guide them through the services.”

We knew it would take a lot of time and resources to produce a meaningful High Holy Days experience for everyone who would be joining us online and in person.

“We spent a lot of time and a lot of money creating something that was safe and that would allow people to come together,” says Stephen Wise President Marc Bernstein. “Someday, we’ll all be back in the synagogue again. But until that day comes, please, please continue to support our synagogue as generously as you possibly can. Our synagogue rests upon the shoulders of the generations before us and the future of our synagogue depends on us.”

It is with deep appreciation that we thank those who contributed to Stephen Wise's Yom Kippur Appeal. If you haven't already made a gift, it's not too late to support our efforts to strengthen Judaism in our local community and beyond. Your contribution, no matter the size, is vital to our community!